Susan Rice in more trouble, with her man language! 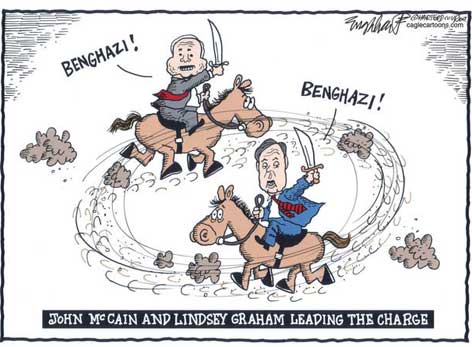 This just in from Reuters! Not only is U.N. Ambassador Susan Rice in deep trouble for reading what the CIA gave her to read, but now even worse she is known for using foul and obscene language. Records show she has said “this is crap,” “let’s kill this” or “this is bullcrap.”  I know I am as upset about this as you are.  Susan Rice is tough, no-nonsense, no apology tour, and was the force behind allowing UN intervention into Libya which won the day. Mostly with French air power I might add. So why are McCain and Graham going after her? Susan Rice battles critics as abrasive style takes toll

In the Republican Party, the most powerful elected war mongers in America are Senators John McCain and Lindsey Graham. War is their life. Strangely they are also known as two of the most moderate Republicans in the Senate.  This seems to mean that America being the top Nation of War is more of a genetic disposition than it is of politics. Same can be said about our unique gun lunacy.

When the attack on Susan Rice began it was understandable, the Romney Campaign needed something, anything at all no matter how absurd or dishonest, to paint President Obama as a failure in curbing terrorism and more specifically, al Qaeda. And even more find something to bring down Obama’s success in knocking off Osama bin Laden. It’s what Republicans do. It is what they are. Character does matters after all. Or so says Rush Limbaugh.

With the election now over, there is little excuse for these two American Titans of War to keep this onerous crap going. This bullcrap is about John McCain’s personal hatred and vindictiveness directed at President Obama who beat his pants off in 2008.

Lindsey Graham gained his day in the Sun as one of the central Republican House Managers impeaching President Clinton. The people of South Carolina moved him up from Congress to the Senate for his help in making the United States the laughing-stock of the world, and giving us our most embarrassing moment in our History.  kindergarten children were asking what a bj was for Christsake. Graham also is the top worshiper of General Patraeus – in fact it was hard to find the Senator saying anything at all without mention of the now soiled war poodle.  This of course confuses the matter for Senator Graham. Especially since Patraeus as the head of the CIA was who is responsible for the information Susan Rice read of the Benghazi attack. Also note that Graham has backed off a bit on this McCain’s War on Obama.

Emails are Catnip for Trump

Benghazi done and the Email saddle is already slipping