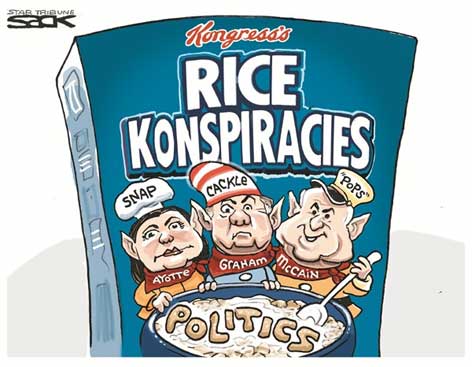 In a week or so President Obama is going to appoint a new Secretary of State. Which could very well be NOT Susan Rice. In fact I was always under the impression it would be John Kerry.  What then with the Republicans do to keep this bogus NO-GATE conspiracy going and going and going? Because going and going and going is what they will do because they have the HOUSE. When will the fair and balanced top Republican investigator Darrell Issa get his hands on this?   And Peter King!  Where has he been, this is his kind of thing!  And of course Little Billy Kristol and the Neo Cons behind the push.

What is this about?  They have the biggest GOP hero of the century, David Patraeus, in the muck, a MILITARY man. The fault here lies with the CIA and the FBI which are also beloved by Republicans. So is it all about bait and switch.  Blame Obama through Susan Rice to take the spotlight away from  Patraeus (military) the CIA and the FBI.

Thing is Mr. President, if you do not choose Susan Rice, they will keep this going until 2016 no matter. It is the nature of the Beast.

John McCain on Putin: Treasonous Trump Abased Himself Before a Tyrant

Trump’s Vile Attacks on John McCain, Bush 41, Sen. Warren and #Me Too Cheered in Montana Rally