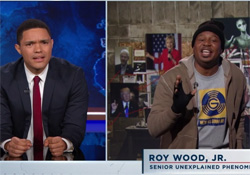 Until very recently Donald Trump was a regular on INFOWARS with Alex Jones, the top crazyass conspiracy man in the world, how soon we forget Trump led the Birther conspiracy, and now bringing up that Hillary murdered Vince Foster conspiracy.

You know where that one came from. Rush Limbaugh spent months everyday on the specifics of how Hillary shot Vince Foster in the head from less than a foot away, wrap him in a carpet, carry the body in the carpet to her brown car, drove to Macy Park on a nice sunny noon day, carried the carpet hundreds of yards through the park, unrolled the body in the woods and dragged the carpet back to her brown car. The proof of this according to Limbaugh? Someone saw a brown car at the park! There you have it. And Donald Trump is with that.