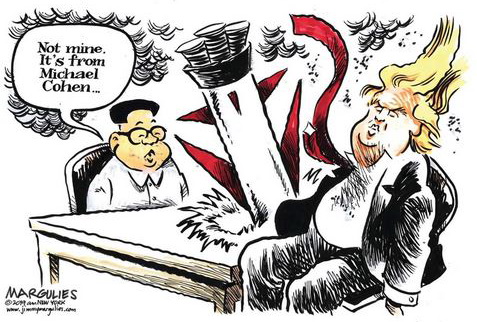 While a nuclear agreement is on the agenda for Trump and Kim Jong-un’s meeting in Vietnam; the truly devastating bombs are exploding in the House Oversight Committee as Michael Cohen reveals devastating and incriminating information about his former associate and client.
Trump labeled Cohen ‘The Fixer’ referring to Cohen’s job of coercing people by threat. Today, Cohen truly fixed Trump – as only an associate who knows where the bodies are buried and the cash is diverted can.

While many of the truths Cohen revealed will come as no surprise, one in particular is a bitter pill to swallow. Cohen stated that Trump initially had no intention of winning the presidential race. He didn’t want it!  It appears that our country elected a buffoon whose only goal in running was to promote his ‘ brand.’ Perhaps Putin made Trump a deal he couldn’t refuse, but it is frustrating to to know that at one time Trump would have settled for hawking his hotels, steak, vodka, water, and fraudulent schools. It does no good to ponder ‘what if.’ Still, I can’t help but wonder how different our country would be today,  if only Trump’s base hadn’t fallen hopelessly in love with his racist ‘me, when I win the lottery’ persona.