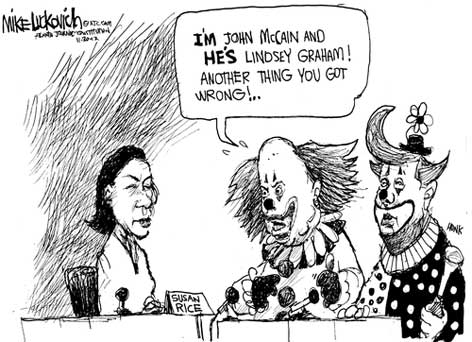 Susan Collins has joined the clown car in all this. So this is where the MODERATE wing of the GOP is at.  It’s not really much about Susan Rice as it is keeping the personal vindictiveness directed at President Obama going and going and going… Like yesterday when Geithner presented the Obama plan for the fiscal cliff, moderate senate minority leader Mitch McConnel burst out laughing, a real guffaw we are told.  But the good news is that some in the Christian Right are mumbling about a third party. They already have a party name for it. Wish them well.

Emails are Catnip for Trump

Benghazi done and the Email saddle is already slipping