Samantha Bee makes a fool of the GOP’s Orange Supremacist 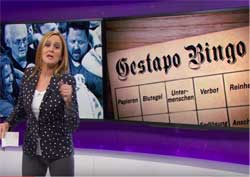 Could it be that Godwin’s Law – using Hitler causes one to instantly lose the argument – has been overturned in this election cycle what with calls of  bloodsuckers, demanding papers, banning and undeserving religions?

Add to that the cult of personality, making the Fatherland great again, the fear, the hate, the bigotry, the racism and what do you have? All moving toward Donald Trump after the Reichstag fire. Oops, I meant 911. For those of you who were unaware, the term Night of the Long Knives is used to describe the political purge and ascent of Hitler and the Nazi party afterwards.

It is not so much that Donald Trump IS Hitler or Mussolini, but that they both began their fascist empires in the same ugly way, that all our problems are because of minorities within and foreigners without.