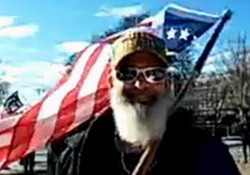 Golly! It is so refreshing to see flag-waving lawmen and women admitting to racism and openly threatening violence, for a change.  The ‘Constitutional Sheriff’s Rally’ is the ugly boil on the behind of other ugly white racists who like to pretend their opposition to Obama is not due to racism.

A small turnout from the group fixin’ to lynch President Obama  scratched and milled around on the White House lawn, while their spokesman, Sheriff Richard Mack met inside with Senators Jeff Sessions (R-AL) and David Vitter (R-LA), and Rep. Martha Blackburn (R-TN) in the Senate building on Dec.10th. Mack is the head of (CSPOA) or the right wing Constitutional Sheriffs and Peace Officers Association. You may also remember Mack from the Cliven Bundy uproar, Mack was the genius who proposed using women and children as human shields. It’s obvious why he is the brains of the outfit.

The gun-totin’ flea bitten “constitutional sheriffs” have their collective panties are in a knot over immigration. That’s as good of an excuse as any to yell about throwing a rope around the neck of the  President of the United States. The ‘peace officers’ claim they are above the laws of the tyrannical US gov’ment and are the “last line of defense” against the hordes of brown invaders (with cantaloupe size calves) streaming over our southern border.

The Southern Poverty Law Center’s ‘Hate Watch’ dropped by, and had a lot of hate to watch.  Hate Watch described the event which had originally been billed in the National Review as ‘a “massive gathering” of sheriffs from around the nation to protest immigration.’ What the folks from Hate Watch saw was a bit different:

“A small group of protesters supporting the sheriffs gathered at the White House and began shouting slogans and demanding the removal of President Obama. Some in the crowd demanded the President be lynched–”Hang the lying Muslim traitor!” one of them shouted.”

If you watch the video, you’ll hear them say this and a lot more. It – and they, are extremely ugly. People from the Southern Poverty Law Center questioned Sheriff Mack, who oddly  denied involvement with the lawless CSPOA sheriffs.
Said Mack: “I was invited to attend and we provided a little hors-d’oevres.”

Let’s not be hasty. I suppose Mack is invited to all sorts of occasions due to his killer guacamole recipe. I hate to question his veracity, but those who saw the event believe he is on rather friendly terms with the lynch mob. According to Hate Watch, the mob was observed ‘lustily’ greeting Mack and the Congress members. That is an interesting choice of words to describe a greeting from a group Mack claims not to know, other than as a catering provider.

The video of the event has recently been made available for your enjoyment,  by the Southern Poverty Law Center.

The Truth About Border Crossers – Alternatino with Comedian Arturo Castro