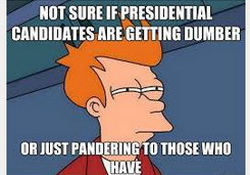 Seth Meyers moderates a truly Super Tuesday debate, with candidates from both parties slugging it out – including all of your (least) favorites, including Donald Trump, Hillary Clinton, Bernie Sanders, Ted Cruz, Marco Rubio, Ben Carson and John Kasich. If there is one thing Democrats and Republicans can agree on, it’s that we’ve had too many debates. There is really nowhere left to go when the Republican front runner is assuring voters that his ‘hands’ (wink-wink) are big and powerful. Perhaps the Demopublicratic format will catch on, and they have done worse than Seth Meyers in the moderator slot.

Ted Cruz answers the all important sexy back (sexyback) question.  Marco Rubio believes he knows why John Kasich is still in the running, and Bernie Sanders offers some insight about Donald Trump’s formative years. Trump tells us directly why he has developed into ‘The Donald.’ and  Ben Carson utters the one word which will define his candidacy – and perhaps how how is remembered in history. The boys argue about who will play Sinatra in the Rat Pack move and so much more!