Republican prayers and best wishes is all they got 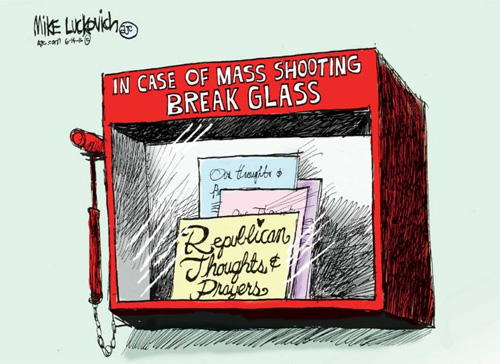 Republicans are good at only three things, making themselves wealthier, prayers and good wishes for everyone else, write that down, some Democrats even walked out of the House as Speaker Paul Ryan did his moment of silence for the tragedy in Orlando.

I don’t even think the GOP problem is Donald Trump anymore, they have been using billionaire money, redistricting, suppressing the vote, guns and Jesus to grab up the uneducated white bigoted assault rifle crowd for so long to offset their obvious fail with demography, that the hole the have dug is too deep to crawl out of.

Word here in Texas is that the GOP is secretly working with Ted Cruz for a convention coup, while it is more than obvious that the Republican Establishment is working to replace Donald with Mitt.  But it’s too late, it’s not so much Donald as it is the brand.