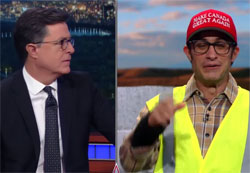 Hispanics in Canada are helping build a huge wall to keep Americans out if  the worst thing in the world to ever happen happens and Trump becomes President of the United States.  Which brings to mind… Has anyone smarter than asphalt given any real thought to an actual Trump presidency and administration?

Rudy Giuliani as Attorney General?  Chris Christie head of the Department of No Fat Women.? This rabid General Flynn as Secretary of Defense?  Joe Apaio as Secretary of State or head of the FBI? Carl Ichan at Treasury? And every crazy surrogate you see on TV becoming ambassadors and bureau heads. Not to mention a self consumed buffoon in the oval office.

Gosh… How could anyone in their right mind even think about voting for Donald Trump? That fine American mix of hate, anger, religious intolerance, bigotr, racism and supidity which has been promoted 24/7 by talk radio and Fox News for a generation.

Stephen Colbert, “Don’t believe the crap you see from these people — the fake news.”