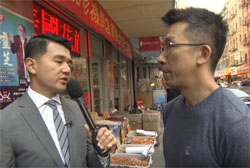 “It’s the year of go fk yourself.” Ronny Chieng tells Fox News Jesse Watters whose recent street video made fun of Asians for not speaking English.

This Daily Show take down of Fox News, Bill O’Reilly and Jesse Watters is more than deserved, but what is hard to understand is why Fox News would go with such an obvious racist attack on Asians?

Are they just following The Donald to attack every minority because they are lost to them anyway so what’s it matter? Or is it possible than neither Trump nor Fox News know what racism is?  It’s like reaching out to African Americans with Rudy Giuliani and Trump screaming for STOP AND FRISK nationwide. Or constant attacks on one fat lady after another. Or attacking Latinos in every way possible who are now a larger minority than Blacks?

So after this cycle of losing more minorities than the time before with Romney, the plan for the next presidential election is giving us a choice between two intolerant religious bigots to ensure the loss of all the Millennials next time. They can’t help themselves. For without that 30% of stupid deplorable white Americans the GOP is nothing. And they know it. We need a huge wall around them.